Published on 15th September 2020 in Members

Former winners Reegan Cake (2014) and Loic de Verteuil (2015) joined six previous winners in the starting field of 97 players for this year’s CG DUDLEY CUP played over the weekend of the 12th and 13th of September.

This year’s CG Dudley was generously Sponsored by MORGAN STANLEY and Stuart Beattie and Mark Palmer both played over the course of the weekend.

Jeremy Crabb was setting out to win the “Triple Crown “for the second time – The Dudley, Pascoe Cup and Club Championship – a feat he achieved in 2018.

Vince Caruso was attempting to become the first player to win both the Cam Wilson Bowl and The Dudley.

So the stage was set for the 70th staging of the CG DUDLEY CUP. Who would be crowned the 2020 Champion?

In near perfect conditions on a pristine golf course, and with the hole locations set the same as for this year’s Nedlands Junior Masters there were some good scores on both days, and-:

“The Curse of The Dudley” continued.

After the first round Jeremy Crabb was on track for his second “Triple Crown” leading both the Gross and the Nett. His fine 3 Under Par Round of 69 (Nett 69) included 4 Birdies, and a “chip-in” Eagle on the 13th Hole. Tristan Geerlings also had 4 Birdies in his even par round and his net 73 saw him in equal 5th place.

In second place and hot on the heels of the Nett leader was the evergreen Bob King with a fine score of 70. It could have been even better if the Par 5’s had treated him more kindly. Next was former Club President Rob Viol on 71 followed by George Gelavis on 72 and seven player on 73.

In the “over 55’s” the favorite, and winner for the past two years, was David Falconer with a Gross Score of 79. His Nett 74 saw him only 5 shots adrift of the leader and he was in with a chance to claim his third Dudley.

Cam Wilson Bowl Winner Vince Caruso had some ground to make up after posting a nett 76.

Another fine day and the questions were –:

Could Jeremy Crabb continue his form? could Bob King, Rob Viol or George Gelavis take out the title? or would someone come out of the chasing pack to claim victory? All would be revealed after 5.30.

Jeremy was first off in the morning and looked to be cruising after the first 10 holes when he was one over the card and heading for a combined nett and gross total of 142, which as it turned out would have been a winning score. Disaster struck on the 14th and 15th holes where a triple bogey followed by a double bogey ruined his chances. Tristan Geerlings, playing in the group behind, after an ordinary front nine of 41, eagled the 10th hole on his way to an even par back nine of 36 and a gross total of 77 which was enough to claim the Pascoe Cup.

Now for the most important Nett Championship –:

Rob Viol played in the morning posting a nett 75 for an overall total of 146. Rob would ultimately look back on his round and rue the lost opportunities he had on the 16th and 18th where triple bogeys proved costly. However, he was still leading from Bob King and Jeremy Crabb on 149. Bob, who started with a birdie lost his rhythm and fell away posting a nett 79.

So the top three players from Round One were safely in the clubhouse and nervously waited for the afternoon players to complete their rounds.

“The Curse” set in early in George Gelavis’s second round, posting three triple bogeys and two doubles in his front nine of 50, dropping him out of contention.

Past President Stuart Munro, after posting a nett 73 in the first round, looked a big threat until “The Curse” set in on his final three holes with triple bogeys on the 16th and 17th followed by a double bogey on the last, ultimately posting a nett 78.

Dean Hannell after a first round 74 also threatened, but bogeys on the final two holes saw him fall short finishing with a net 73 and a total of 147.

So, who was going to displace Rob Viol from the top of the leaderboard?

It was left to Campbell Thomson after a first round nett 75 looked to be out of contention. Five double bogeys and a triple bogey looked to have ruined his chances for victory. Campbell went under the radar in round two. After starting with a birdie, he played steadily, keeping the double bogeys to a minimum. An excellent par on the difficult final hole saw him post the best round of the day with a nett 71. This was good enough to lift him to equal leader with Rob Viol.

Congratulations go to the winner of the 70th playing of the CG Dudley Cup, Campbell Thomson, a moment he will cherish for life.

The Pascoe Cup for the best Gross Score over the two rounds was keenly contested and as reported earlier was won by Tristan Geerlings on a countback from Jeremy Crabb.

The Over 55’ s Trophy was a closely run affair with David Falconer, trying to win his third consecutive Championship shooting a total gross sore of 162. He achieved that goal winning by three shots from Stuart Waters.

Congratulations to all other winners over the weekend.

Thanks go to all of those who made this year’s event an enjoyable experience. – Course Staff, Pro Shop Staff, House Staff and our caterers On Par Catering.

Special thanks to Mark Palmer and Stuart Beattie from MORGAN STANLEY for their sponsorship of the CG Dudley and Club Championships.

We now move into the Club Championships themselves and wish all qualifiers the best of luck.

Whilst there has been, and will be many sad stories coming from this year’s Dudley perhaps the quote from Greg Polla summed up the “Curse of The Dudley”

“You cannot win the Dudley when you have a Quadruple Bogey on the first hole!” 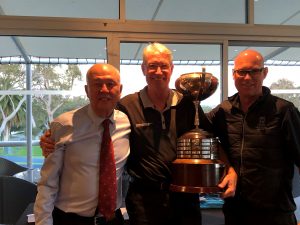 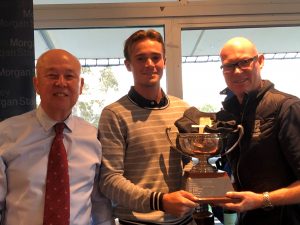 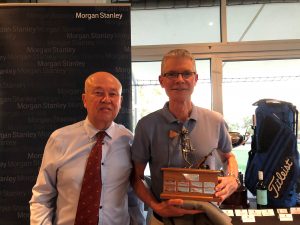