Published on 9th September 2020 in Members 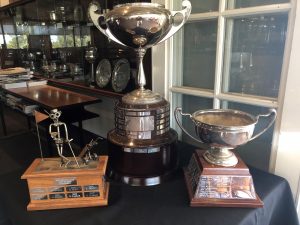 2020 marks the 70th ANNIVERSARY of the most prestigious event on the Men’s Calendar – THE CG DUDLEY CUP.

“THE DUDLEY”, as it is affectionately (or otherwise) known to many, will be played over 36 Holes of Stroke Play over the weekend of September 10 and September 11 and sponsored by MORGAN STANLEY. A vote of appreciation is extended to members Stuart Beattie and Mark Palmer for their support.

So, in the lead up to the Dudley it would be appropriate to provide a little history:

In the first year it was played over 72 Holes of Stroke Play over two consecutive Sundays and the Gross Winner was crowned the Club Champion.

Not long after 1951 this changed and the winner of The Dudley became the player with the best Nett Score over 36 Holes of Stroke Play played on a Sunday and became the qualifying event for the Club Championship(s). This is still the case except the two qualifying rounds are played over two days.

Prior to 1951 “The Keenan Cup” was the qualifying event.

At the time of writing there is one player in this year’s field trying to win The Dudley for the third time and six others attempting to claim a second victory-;

Whilst there are many club personalities who have won The Dudley over the last 69 years probably the most memorable and popular was in 2015 when Louis De VERTEUIL holed lengthy putts on the final two holes to claim victory becoming the oldest player (88 Years ) to win The Dudley – a record that may stand forever.

Each year every player thinks or believes they are going to win, only to one by one fall out of contention – some as early as the first hole, some, after leading the first round fall by the wayside early in the second round and some leave it to the penultimate and/or the final hole.

This became known as “THE CURSE OF THE DUDLEY” and many players were heard over the course of the weekend to cast aspersions about the Founding President.

Common comments (expletives deleted) have rung out over the course-:

No doubt this year will be no different.

In addition to the CG Dudley Cup there are two other Perpetual Trophies awarded-:

The Pascoe Cup, named after the Club’s first Captain, is awarded to the player with the Best Gross Score over the two rounds. The 2019 winner Ben Cullinan will be looking to go back to back this weekend but will have some stiff opposition from the likes of Jeremy Crabb, Harry Traylen, Tristan Geerlings, Edmund Hall, Anthony Joseph and James Morris.

The over 55’s Trophy is awarded to the player (over 55) with the Best Gross Score over the two rounds. The winner from the last two years David Falconer is in the field and will be keen to make it a hat trick.

Best wishes are extended to all players on the weekend in their quest for victory.

“May the Curse of The Dudley NOT be with you.”