Published on 29th September 2020 in Members

The Championships began on 8 September with two qualifying rounds (stroke) followed by three rounds of match play.  There were reasonable numbers participating in the Championships which was pleasing.

Many thanks to Judith and Bruce Drummond of Leaderpress for their major sponsorship of the Ladies’ Club Championships.

Day One saw Grace Furness shoot a gross score of 85, Robyn Conway with a nett score of 73 on count back from Krystyna Knottnerus and Anthea Murchison.

Day Two, again, saw Grace come in with another fabulous gross score of 86, Sue Kelly with a nett score of 73 closely followed by Carol Berzins on 74 on a count back from Patricia Noske, another consistent round, nett 75, by Robyn Conway.

First round of the match play for Club Championship saw Grace Furness beating Patricia Noske 3/2, Rhonda had a close encounter with Krystyna Knottnerus 1 Up, Ali Baker defeated Sue Kelly 4/3 and Honor beating Judith Paterson 5/3.  Rhonda went on to beat Grace 2 Up and Ali defeating Honor 5/4 in the Semi Finals.

The final day of the Championships brought some light rain along with some close contests.

For the A Grade Plate – Joan Brown and Jan Halliwell had a very close match and the golf was of a high standard.  Jan got off to a flyer and then Joan fired up with some great long putting which put her ahead and she kept the lead until their final hole.

The B Grade Championship – Robyn Conway and Mandy Sudlow-Brown were both a bit nervous to start but Mandy won the first hole and they squared the second Robyn started to settle down and held a narrow lead after 9 holes.  The second nine saw a reversal and Mandy played some lovely golf to take the lead and after 14 holes she was 3 up.  A win on the 15th saw Mandy become our B Grade Champion with a 4/3 result.

The B Grade Plate – Jill Cassidy and Katherine Carr were pretty close to start with good driving and putting by both. Jill had a 2 hole lead but Katherine gradually ground her way back in the second nine to win 4/2.

The C Grade Championship with Ping Heng-Tan and Anne Marie McNaughton having a close tussle until Ping won the 15th and 16th holes and seizing the moment to win on the 17th hole.

The thirty six holes for the Club Championship saw Ali Baker taking out the prize beating Rhonda Moore on the 30th hole.  Rhonda gave a good contest and was able to contain her 3 down score after nine holes to come in at lunchtime still three down.  It was Ali’s day who didn’t put a foot wrong.  Even though Rhonda gave it her all, Ali was the more consistent player on the day. 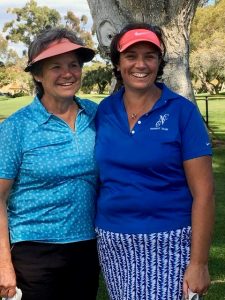 Congratulations to all who played and also thank you to those who took the time to come and share the win by all the girls playing on the final day.

There was beautiful sportsmanship and camaraderie out there, a credit to all.

Following play, presentation of trophies for the Championships took place in front of a large group of ladies along with the Club President, Tim Tan and Club Captain, Jo Alexander sharing the joy of the winners.