Published on 12th February 2021 in Members 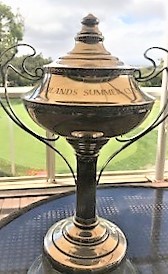 It appears as though there was not a Perpetual Trophy for the Summer Cup so in the early 70’s the sons and daughters of Trevor Rodda, a well-respected member of the club and Captain in 1954 and 1955, presented a trophy to the club in memory of Trevor. Trevor’s son Richard, a longstanding member of the club, won the Summer Cup in 1966. Janette was his eldest daughter and Sue still has a connection with the club. Sue is the wife of another longstanding club member, John White.

As with most of the club’s trophy events it was also played over 36 holes on a Sunday and on many occasions, players had to contend with temperatures in excess of 100 degrees – nowadays  in excess of 37 degrees.

Over the years the Cup was played as an Open Event which became an Invitation Event and now it is a Member’s only event played over two days, which is in accordance with all other two round events.

The Sponsor this year is Phil Johnson Plumbing and Gas and the club is indebted to Phil for his long time support. Phil himself was not only a National Representative, State Representative, Club Representative and Club Champion but he also won the Summer Cup in 2012.

Good luck to all former winners and the other 74 players in their quest for victory. Let’s hope for some pleasant weather over the two days – not like last weekend where one would think we were about to play the Winter Cup.