Sunday March 28th saw a maximum field of 32 pairs compete on a warm and sunny day in the 22nd Anniversary of the Millennium Cup.

This year the Furness and Botello Families continued their long association with the event and again sponsored the day.

As the name suggests the Millennium Cup was first played in 2000 and was the brainchild of the committee of the day led by President Rob Viol and Captain Darrell Arnett. The inaugural winners were Darrell Arnett and his daughter Renee who won again in 2003. Darrell also partnered Rhonda Moore in their victory in 2009. The Perpetual Trophy was donated by Dennis Parker (Life Member).

This year’s event was keenly contested with 10 couples finishing 4up or better and three couples tied on 7 up. 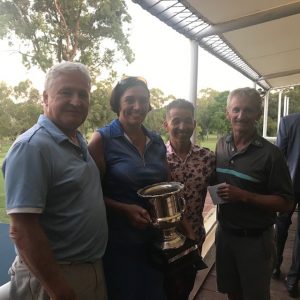 Former Ladies Captain, Rhonda Moore (H’Cap 13), teamed up with relatively new member Stuart Gicquel (20) to win the 2021 Millennium Cup on a countback from two other couples on 7up. The Runners-Up were the defending champions Vanessa and Bill Stephen (15 and 11) and third were Cath Bellemore (4) and David Steiffel (11).

The name of the game in a 4 Ball Par event, in particular, is not to have any losses.

With the three couples tied on 7up-;

Perhaps the most unfortunate pairing was the 5th placed combination of Jill and Tony Morgan (25 and 16) who lost both the 9th and 18th holes.

There almost certainly are other hard luck stories.

So now Rhonda Moore has won the Millennium Cup with three different partners – Darrell Arnett, Marty Morris and Stuart Gicquel. Well done Rhonda. Who will be your lucky partner in 2022?

Appreciation is extended to the Sponsors of the day the Furness and Botello Families, the course staff in the presentation of the course – the course truly is in great order – the House Staff and John the Chef for looking after the players’ inner needs and to the Pro Shop Staff in ensuring a successful day.

The next “Mixed Major” is the O and S Allom Bowl, scheduled for Sunday May 2. The defending Champions are Chris and Stewart Wharton. After finishing second in 2020 with Tim Tan, Rhonda Moore will be looking for another “Mixed Major Title”.

Roving reporter’s comment – Maybe Rhonda has actually won more “Mixed Majors “than any other club member. I am sure we will be advised in due course.