The Winter Cup was first played in 1938 and was one of the first Perpetual Trophies played for at the club. The trophy was presented to the club by Dunkley’s Diamond House and has been played for every year (bar one) since its inception.

2021 marks the eighty third playing of the Winter Cup and it was held on the weekend of the 24th and 25th July in cool but pleasant conditions prevailing. Seventy-one players contested this year and overall the scoring was of a high standard. The 36 Hole Par event was sponsored by long time supporter of the club, Andrew Fraser and we acknowledge, with appreciation, his contribution to this year’s event, and to the club.

After the morning field had completed their rounds, Grant Evans gave the pm Players something to chase with a fine score of 4up. Grant, from his 7 handicap, started from the 6th and after 9 holes was square with the card and 4 up. He held this over the final nine holes.

Greg Parry, starting from the 7th, exploded out of the blocks and was 4up after 6 holes. A couple of lapses over the next 9 holes saw him fall back to square but 2 pluses over his last three holes saw him right the ship finishing 2up.

In the afternoon Michael du Pont matched Grant Evans 4up score from the morning. His round (starting from the 7th) included 7 pluses, and could have taken the outright lead on the final hole, only to have an untimely loss. Nevertheless, he was the 1st round leader, on a countback.

Vice President Damon Watkins, playing with the sponsor in the “marquee group” from the first tee, went along quietly for the first 14 holes and was 1up. Suddenly 3 consecutive birdies from the 15th to the 17th saw him join the leaders on 4up – only to lose the final hole dropping him back to 3up.

The evergreen Graham Smith joined Damon on 3up. After 9 holes Graham was Square having had 2 pluses matched by 2 losses. His last 9 holes were impressive where he did not lose a hole and had 3 pluses – a mighty effort.

On 1up after the first round were Peter Baker, Campbell Thomson, Matt Craig and Ken Hall, with a further 3 players back on Square.

So, who was going to take out the 2021 Winter Cup? Would it be one of the overnight leaders or would someone come out of the chasing pack?

Fine conditions were welcomed by the players with a freshening afternoon breeze.

Grant Evans started well and was 1up after 6 holes. However 3 losses over the last 3 holes of his first nine undid his good work. He resurrected his round over the last nine with 3 pluses and ultimately finished 1down and a two round total of 3up.

Past President Greg Parry who started the day on 2up had 6 pluses in his first 17 holes and was4 up for the day and 6up overall. A disappointing final hole (the 6th) saw him finish his round 3up and an overall score of 5up.

Playing alongside Greg was Jeff Lane who after an even par first round was looking to move up the leader board. Well that he did “in spades”. 2up after 3 holes he was on the move but this came to a halt with 2 losses. Then he had 5 pluses in the next 6 holes and with 6 holes to play was 5up. A final hole plus saw him finish his round 6up for an overall score of 6up and the clubhouse leader with Greg Parry left in second place.

So who could catch Jeff Lane in the afternoon?

The first round leader Michael du Pont was flying after 12 holes and was 4up and 8up overall. 3 losses and a plus in his closing 6 holes saw him finish the day 2up and 6up overall – equal with Jeff Lane.

Graham Smith was also heading in the right direction, but similar to Michael after being 3up with 6 holes to play closed with 3 losses and a plus and a final round of 1up putting him back in 5th place overall with 4up.

Of the chasing pack no one was making inroads and it was left in the hands of Damon Watkins to see if he could overtake the clubhouse leader Jeff Lane.

Putting the disappointment of his first round finish and a loss on the 1st hole behind him, Damon regrouped to turn square. 3 pluses followed in the next 6 holes which saw him join the lead on 6up. An untimely 3 putt on the 16th saw him drop back to 5up. 2 pluses over the final two holes to win was out of his reach after a half on the 17th. A plus on the final hole saw him finish 3up for the day, and 6up overall.

So in an extremely close finish to this year’s Winter Cup, after three players finished on 6up, a countback was required to determine the winner.

After his final second round of 6up Jeff Lane was declared the winner on a countback from Damon Watkins and Michael du Pont.

So a new champion is crowned. Congratulations to Jeff Lane, who not so long ago was playing in a moon boot. He also added the Winter Cup to his 2019 Summer Cup victory showing he is not just a fair-weather golfer.

Finally thankyou to Andrew Fraser for his support of this year’s Winter Cup and we also acknowledge the Course Staff, House Staff and Pro Shop Staff for their contribution to a successful weekend. 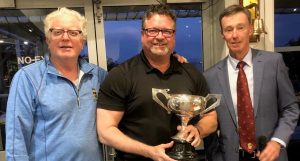