Published on 21st September 2021 in Members

The Fifty Sixth playing of the DALKEITH CUP took place on a beautiful spring day on Sunday September 19 with a field of twenty six pairs. We are most grateful for the generosity of Krystyna Knottnerus and Tony Cowan who continued their sponsorship of the Cup – A mixed four ball combined stableford event – the type of event where one of the two players has 42 points, finishes 15th, gets an honourable mention for his 42 points and loses 2 shots.

The event itself was named after our neighbouring suburb of Dalkeith.

“The suburb of Dalkeith derives its name from an estate of 320 acres taken up in 1831 by Adam Armstrong. He named it Dalkeith Farm after the district near Edinburgh from which he had migrated in 1829”

The 2018 and 2019 winners, Marg Doyle and Joe Alexander, were unable to pair up again as Joe was still recovering from knee surgery. Marg was joined by the in form Tim Tan and possibly started one of the favoured combinations. – but the pairing failed to live up to expectations. Another former winning combination had been separated as Grace Furness could not join her father Gavin – last week’s Spring Cup winner. Gavin was joined by Joan Brown and this would be a pair to watch – finally finishing in equal 6th position.

Ultimately the winners were the popular Lady Captain Carolyn Browne and Mackenzie Buck with an excellent score of 74 points – with Carolyn having 38 points from her 21 handicap and Mackenzie 36 from his 5 handicap.

Whilst they won by 3 points it was not without drama over the last 3 holes.

It appeared after 15 holes that the 2009 winners Cath Bellemore and Paul Baster would be a “shoe in” and win for the second time.

Bearing in mind that over 3 holes 12 points is “square”, things changed dramatically with the leaders unexpectedly falling away with 6 points, the Munros fairing only a little better with 8 points and Veni and Gary 10 points.

The Wharton’s had an excellent 15 points and Ali and Stuart 16 points.

So now to the final Leaderboard-

The top four individual scores were –

So, Carolyn and Mackenzie secured their second major victory of the year after winning the O and S Allom Bowl in May and will now be chasing a win in the 2022 Millennium Cup to make it 3 Majors over the space of 12 months – a mini slam maybe.

Thanks to the club staff who contributed to a most enjoyable afternoon and evening.

Congratulations to our 2021 Dalkeith Cup Winners Carolyn Browne and Mackenzie Buck and thanks to Krystyna Knottnerus and Tony Cowan for their sponsorship of the day.

The final sponsored Mixed Event on a Sunday is scheduled for the 7th of November and is an American Foursomes event sponsored by Jill and Tony Morgan. 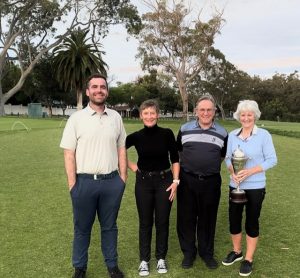