Published on 21st February 2022 in Members 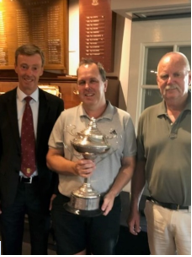 The weekend of the 19th and 20th of February saw 79 players contest the 72nd playing of the Summer Cup in true summer conditions with temperatures on both days in the mid 30’s.

Before getting on to the results it is worthwhile repeating a little bit of the history of the Summer Cup.

The Cup was presented by Trevor Rodda’s sons and daughters. Trevor was club Captain in 1954/1955.

It was originally played over 36 holes on a Sunday and played as an Open Event which became an invitational event and then a member only event played over a weekend.

Hot conditions greeted players on Saturday and the scoring matched the conditions with twenty players finishing square or better.

Don O’Brien (15) led the way with an excellent score of 5up. Starting from the 7th in the afternoon, Don overcame a slow start, 2down after 3. Four consecutive pluses from the 10th to the 13th saw him 2up after 9. Over the last 9 holes he had 4 pluses and one loss – a good finish to the first round of the Summer Cup.

2011 winner, Greg Polla (13), was close behind on 4up. Playing in the morning from the 1st he also starterd slowly losing the 1st but rebounded with 4 conecutive pluses from holes 2 to 5. He turned for home 4up and played the back nine square.

Along with Greg on 4up was Michael du Pont (12). Playing from the 5th in the afternoon, after 4 holes he was sqaure. Four pluses over the next nine saw him 4up with 4 holes remaining – and he played those square and remained 4up.

The defending champion, Gavin Furness (9), was back in equal 31st position on 2down with dual champion Callum White (3) one better at 1down.

Ben Cullinan (scratch) led the gross with an excellent score of square – a par round of 72.

The stage was set for an interesting second round with the likely winner coming from the top 20.

FINAL ROUND and OVERALL

Another hot day greeted the players and once again scoring was good with 18 players finishing square or better.

After the completion of the morning round the 2011 champion and popular Gallery Member, Greg Polla, was not able to repeat his “stellar” performance of the first day and had a disastrous round of 7down falling well out of contention.

Gary Hing jumped out of the blocks and after his first 9 holes was 2up, having collected 4 pluses on the way. A couple of untimely losses on his final nine and only one plus saw him finish the day 1up and overall he was 4up.

Andrew Roberts (17), after a first round 1down, came close with an excellent second round score of 4up which included 4 pluses in his final 6 holes.

Trivia – Over the course of the weekend on holes 1-6 Andrew amassed 8 pluses, 3 halves and one loss – not bad.

Dylan Morgan (13) was also on 3 up after two consistent rounds of 1up and 2up. Another player who may rue lost opportunities – 13 pluses over the two rounds was an excellent effort but 9 losses let him down.

At the end of the morning’s play Gary was the overall leader on 4up.

So now Don O’Brien and the chasing pack knew what they had to do – better Gary Hing’s overall score of 4up.

Starting from the 7th, Don was square after his first 3 holes but then unleashed 3 consecutive pluses from 11 to 13 to be 3up on the day with 9 holes remaining. All of a sudden he was 8up overall and led by 4.

Over the last 5 holes he probably felt the pressure and wilted somewhat with two losses in the last two holes (5 and 6) to finish 1up on the day and an overall score of 6up. Would this be good enough? Time would tell.

After a first round of 3up on Saturday, Damian Long was looking for a good start – but unfortunately that was not to be and 5 losses in his first 10 holes cost him any chance of victory. A late fight back saw him finish the day square and overall in equal 3rd position with a score of 3up.

Michael du Pont was seemingly the only person in the way of an “O’Brien” victory but he could only manage 1 plus all day on his way to  a second round score of 3down and an overall share of 7th spot alongside Paul “Chook” Henderson (23) who had two rounds of square and 1up.

Ben Cullinan had a final round 69 (3up) and finished a very creditable equal third alongside Andrew Roberts, Dylan Morgan and Damian Long – all on 3up.

Best previous winner was Callum White on square and the defending champion, Gavin Furness, “melted down” in the heat finishing in equal 33rd position with 6 down.

Michael du Pont (4up) claimed the best first round score on a countback from the hapless Greg Polla.

Ben Cullinan took out the Best Gross with an exceptional score of 3up and runner-up was Callum White on 5down.

Gary Hing’s final nine holes ultimately did not prove too costly and he finished runner up on 4up.

But all credit to the winner, Don O’Brien, who led from start to finish and thoroughly deserved to win the 72nd playing of the Summer Cup. Don has been knocking on the door in recent weeks with 3 of his last 4 scores 36 points or better.

Thanks once again to Phil Johnson Plumbing and Gas for continuing their support of the Summer Cup.

Over the last period of time the condition of the course has come under fire, so special mention must be made of the course staff for presenting a very well prepared course after the trials and tribulations of the last couple of months – congratulations and well done.

As usual the house staff , pro shop staff and John in the kitchen made it a successful weekend for everyone.

So, the Summer Cup is over for another year and we salute a new Champion Well done DON O’BRIEN