News: A Weekend of Opening Days

The weekend of the 12th and 13th March saw plenty of action on the course with the MELVISTA CUP played on Saturday and the MIXED OPENING DAY event on Sunday. 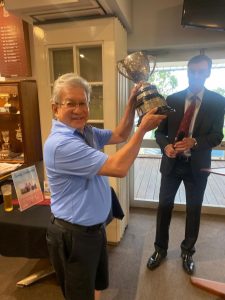 The Melvista Cup attracted a field of 93 players and included in the 2022 field were the following previous winners –:

Sponsorship was provided by Saint Quentin Dental courtesy of Immediate Past President Tim Tan and we thank Tim for his continued support.

Following the completion of the morning round the 2022 “B” Grade Champion Wilfred Ong (11 H’Cap) was in the lead with a good score of 3 up. Dylan Morgan (12 H’Cap) was running second on a countback.

The question was would it be enough, and Wilfred had to wait until the very last card was submitted by Stuart Waters (8 H’Cap) to learn the outcome. Stuart also finished 3 up but both his back nine and that of Dylan were not enough to claim victory as Wilfred finished 5 up on the back nine including a wipe on the 15th hole after his one-foot putt hit the pin and came back at him.

Congratulations to the 2022 Melvista Cup winner, Wilfred Ong and once again a big thankyou to Tim Tan for sponsoring the Men’s Opening Day.

The Mixed Opening Day was played on Sunday 13th March and proudly sponsored by Cath Bellemore and Paul Baster. A beautiful day for golf was welcomed by the 54 players (27 pairs) playing in a Mixed 4 Ball Multiplier Stableford event.

The 2021 winners with 77 points were Louise and Jeremy Walsh who were unable to defend their title.

Multiplier Stableford is a game where you can have 4 points on a hole and your partner has none then your recorded score is Zero Points. So it is vitally important that you score on every hole, even if it is 1 point. After all, to state the obvious,4 x1 is greater than 4×0!!

The winners were Joan Brown (23) and Stuart Gicquel (17) with 84 points. And they actually had 3 “Zero pointers” but they did have 3×9 pointers and 1×8 pointer. Sorry Stuart, but it has to be said that the dominant partner was Joan Brown who had an amazing 46 points herself – including a “wipe” on the 17th.

Other good scores came from –

The best score on the day was an amazing 92 points by Cath Bellemore (H’Cap 3) and son David Baster (H’Cap 1) – and they scored on every hole.

Their card was splattered with Birdies – 10 in all. David had 42 points (67 off the stick) and Cath 39 points (74 off the stick). Truly a remarkable effort by them both.

Unfortunately, they were ineligible as David is no longer a member of a club – we could do with him in Pennants.

Finally thanks once again to Cath Bellemore and Paul Baster for their support of the Opening Day Mixed and congratulations to all winners.

The next mixed event on the calendar is the Millenium Cup (a mixed 4 ball stableford event) which is scheduled to be played on Sunday April 10 and sponsored by The Furness and Botello Families.

The defending Champions are Rhonda Moore and Stuart Gicquel.

The season is now well and truly open and we wish everyone happy golfing in 2022.