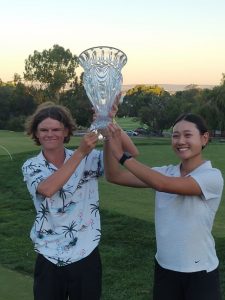 The 41st NEDLANDS JUNIOR MASTERS was played on Sunday March 6 and Monday March 7, attracting a talented field of 52 boys and 18 girls from around the state.

The history of the Nedlands Junior Masters has been well documented and the names of two new winners will be added to the Honour Board in the downstairs bar. The Board was presented by Ian MacDonald, a long-time sponsor of the Junior Masters.

SRIXON and RETRAVISION CANNINGTON were the Major Sponsors this year and we sincerely thank them for their support.

Fifty-two Boys and eighteen Girls set out on Sunday morning in their quest for the Nedlands Junior Masters titles. Fourteen of those held handicaps of Scratch or better, so some good scoring was expected – on a hot day with temperatures in the high 30’s.

Some of the Highlights of Round One were-.

Fresh from his inclusion in the State Junior Team, our own Riley Gott came out firing and finished with a five under par round of 67, which included 7 birdies and two bogeys (both on par 3’s).

He led from fellow Junior Team Member Alex Maxwell (Royal Fremantle) and George Barclay (Joondalup) both on four under 68.

George’s round included 4 birdies in his closing six holes and Alex had an Eagle on the 13th hole to go with his 5 birdies.

After the completion of the first round Riley Gott led the Boys’ field by one shot from Alex Maxwell and George Barclay.

The defending Champion, Sheridan Clancy (Lake Karrinyup), playing off +3, had an up and down day matching 4 birdies with 4 bogeys to finish with an even par round of 74.

Playing with Sheridan was Amanda Gan (Mount Lawley) playing off +1 and a quiet start saw her one over par after 5 holes. Then the fireworks began, and she reeled off 7 birdies in her final 13 holes finishing with an outstanding score of six under par 68. Note – The Women’s Course record is 65 when playing a full-length course.

Matching Sheridan Clancy’s even par round was Jorja Hinson-Tolchard (Gosnells) with Celine Chen (Joondalup) back on 75.

Following the completion of the first round Amanda Gan led Sheridan Clancy and Jorja Hinson-Tolchard by six shots, with Celine Chen a shot further back.

Once again hot conditions prevailed throughout the second round – a lot different to last year where electrical storms interrupted play in the late afternoon.

In the Boys, it seemed to be a tussle between the top 3 who were paired in the final group and in the Girls, it was a matter of who could catch the runaway first round leader – Amanda Gan?

After 9 holes a move came from Ollie Marsh and after a four under par front nine, he joined George Barclay on five under with Alex Maxwell a shot further back. After a two over par front nine Riley Gott had slipped to three under.

After 15 holes it appeared to be a race in 3 with George Barclay seven under leading by one from Alex Maxwell and Ollie Marsh. Riley Gott was seemingly out of contention back on three under. Each of the top three parred holes 16 and 17, so it was down to the final hole.

Ollie Marsh, playing in the second last group, made bogey at the final hole, and slipped back to five under and had to sit and watch his rivals play the 18th.

George Barclay ran into trouble and made a clutch putt from 3 metres for bogey which saw him tie with Alex Maxwell with a six under par total. So, a sudden death playoff was required to determine the winner.

Holes one and eighteen were played and after 3 holes the pair could not be separated. On the second time up the eighteenth George sank a putt almost identical to the one he sank on the 36th hole leaving Alex with a 3-metre putt to continue. He missed it to the left and after an epic battle the winner was declared – George Barclay from Joondalup Country Club.

Ollie Marsh was third and Riley Gott, who finished with 3 birdies in his final 4 holes, joined him on 5 under par.

With Amanda Gan way out in front what would unfold?

Well after an Eagle on the 4th hole Amanda stretched her lead to eight shots and despite an Eagle on the ninth, Sheridan Clancy was still seven shots off the pace after the first nine. Noone else was making inroads.

Amanda Gan ran out the winner after she finished with a two under par final round of 72 for an overall total of 140 – eight under par. The Defending Champion Sheridan Clancy closed with a three under par 71 to finish runner up five shots adrift on 145 – three under par. Celine Chen finished third on 147 – one under par.

Two excellent rounds of 68 and 72 saw Amanda Gan crowned the Girls Champion for 2022.

Given the problems faced by the course staff over the last six months or so, they did an excellent job in their preparation of the course.

A special vote of thanks is extended to the club staff (Office, House, and Pro Shop) for assisting the Tournament Directors prior to and during the event.

Volunteers are the lifeblood of a club and as we have come to expect there was no shortage of volunteers over the two days – spotting, scoring and providing a sausage sizzle. Thanks once again to each one of you for your help over a hot two days.

We thank Susie Rich for coordinating the spotters. She does the club proud with her untiring efforts.

After last year we thought that Cedric Bell and Martin Morris had hung up their badges, but Cedric was back again, and he was joined by Brady Morris as the two Tournament Directors. Martin was assisting wherever possible. So thankyou once again to Cedric, Brady, and Martin for their role in the organisation of a successful Junior Masters.

A quote from last year – We believe that this has been your swan song – Roving Reporter’s Footnote “and if you believe that you believe in fairies!! They will be there in some role even if they have to cook sausages”

The NEDLANDS JUNIOR MASTERS is over for another year, and we congratulate our two new Champions George Barclay and Amanda Gan who will join many illustrious names on the Honour Board.